On October 9 and 10 I was invited to hold a design thinking workshop in Imizamu Yethu, a township in Hout Bay, south of Cape Town. The goal was to bring various members of the skateboarding community together and find a common understanding of what they want to do with their skatepark. It was a rough ride and challenging 2 days, and at the end we brought out some results.

Here is its documentation:

It was a slow start but then somehow it took off.

We started and closed the day with a circle session; at the beginning everyone gave a brief introduction of themselves, we ended with the personal takeaways of the day.

We started with an individual session. Everyone was asked to write on post-it-stickers what they like about their skatepark. And then we asked them what they don’t like.

After the LIKES/DISLIKES we asked them to work in small groups of four and to write down where they want to take the skatepark, what they want to do in order to create more LIKES and leave behind the DISLIKES.

After the team work they presented their outcomes.

You find all the ideas on the google drive which I’ve shared earlier.

I will share the summary further down in this document.

We closed the day with a circle session. Everyone could say what they would take “home” from the workshop. For some of the younger skateboarders it was difficult to speak out in front of the group, yet they all managed. Takeaways were that they liked to work in teams, they had never done this before, they learned something, that they are excited.

We closed the day and agreed that we would start next morning at 9 am.

Before everyone showed up for the morning session we summarized the ideas they had been working on the previous day. We clustered similar topics and boiled it down to these two overall topics – DRUGS and CRIME: 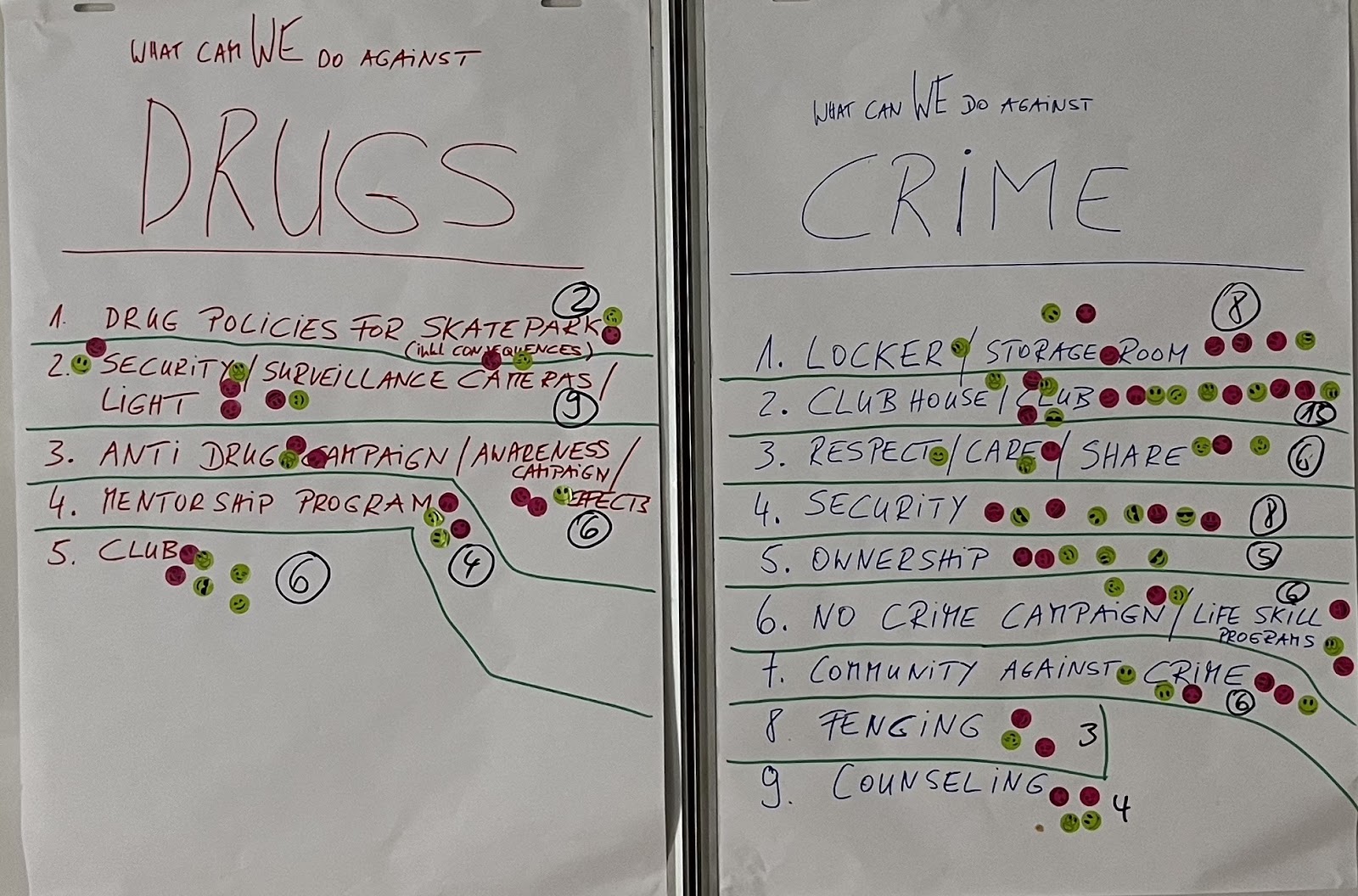 We also clustered their LIKES on which their ideas were based and put them on the wall:

During the opening circle we discussed and agreed on some rules which would lead us through the day. I started to give some examples and explained them and asked for more from them. Nothing was added. So we agreed on what I suggested.

After the opening circle we voted on which topics we would dig deeper and find solutions. Each participants had 6 votes (red and green smilies) – they could share their votes which ever way they wanted: 6 votes for one topic, one vote for 6 topics, 2 votes for 3 topics …..

On the chart paper DRUGS and CRIME above you can see the votes. We boiled them down to the following 4 topics on which we then started to work in teams again:

In the first session we had four groups, each group started to work on one topic. The goal was to write everything down on chart paper what came into their minds to describe the issue they were working on. What does the idea of a Clubhouse mean in detail? The same they did for each topic. After 30 minutes we switched the chart paper and the next group could add their thoughts/ideas to the next topic. We switched four times. In this way each group could contribute to each topic. We then summarized the ideas and condensed the content.

Again, you can find all papers on the google drive which I’ve shared earlier.

After this session we summarized topics 3 and 4 and combined them into one: Security/Lockers because the entire security discussion was focused mainly on lockers.

Between the sessions we had small breakouts where one skateboarder took the lead and did a short round of exercise with everyone. I felt this was highly appreciated and released energy. It was tough to keep the young skateboarders at the table and focussed, with a few ups and downs (I had to send 2 of them home), it worked.

During the lunch break I came to know that some of the older skateboarders wanted to move on without the smaller kids. They said they weren’t focussed and didn’t add to the discussion. I didn’t agree with their suggestion because I truly believe that it is much better to include the smaller kids in such a process because only then they will learn and take ownership of what they’ve been working on. This won’t happen overnight but over time. I’ve seen this on many occasions and this is why I couldn’t compromise on that.

I left it up to the participants to decide how they want to move on.

I felt the way this was brought up wasn’t very “productive”. I felt it would have been much better to discuss this openly and in a circle. This is what we did after lunch. We agreed to continue as we started and bring the workshop to an end.

We then went to our next team session. The goal was to create a detailed ACTION PLAN for each topic. This meant to think about what do they need to do in order to get the project going. You will see the outcomes below. The action plans were already quite precise.

Because it was already later in the afternoon we agreed in the closing circle time that we would meet again on Sunday, October 16 for two more sessions. One session to dig even deeper into the details of each project and then in a closing session to bring together what they already have on skatepark stories, media clips, videos, photos and so on to combine all this in a kind of brochure which is telling the story for the skatepark. This would be needed to find sponsors. I also mentioned that a legal entity (=NGO) is important once you start dealing with sponsors, it needs to be clear where the money goes and who is taking responsibility. And this entity would give the skateboarders a feeling of belonging as well.

Unfortunately no one – besides Kola and Jonni – showed up on October 16. 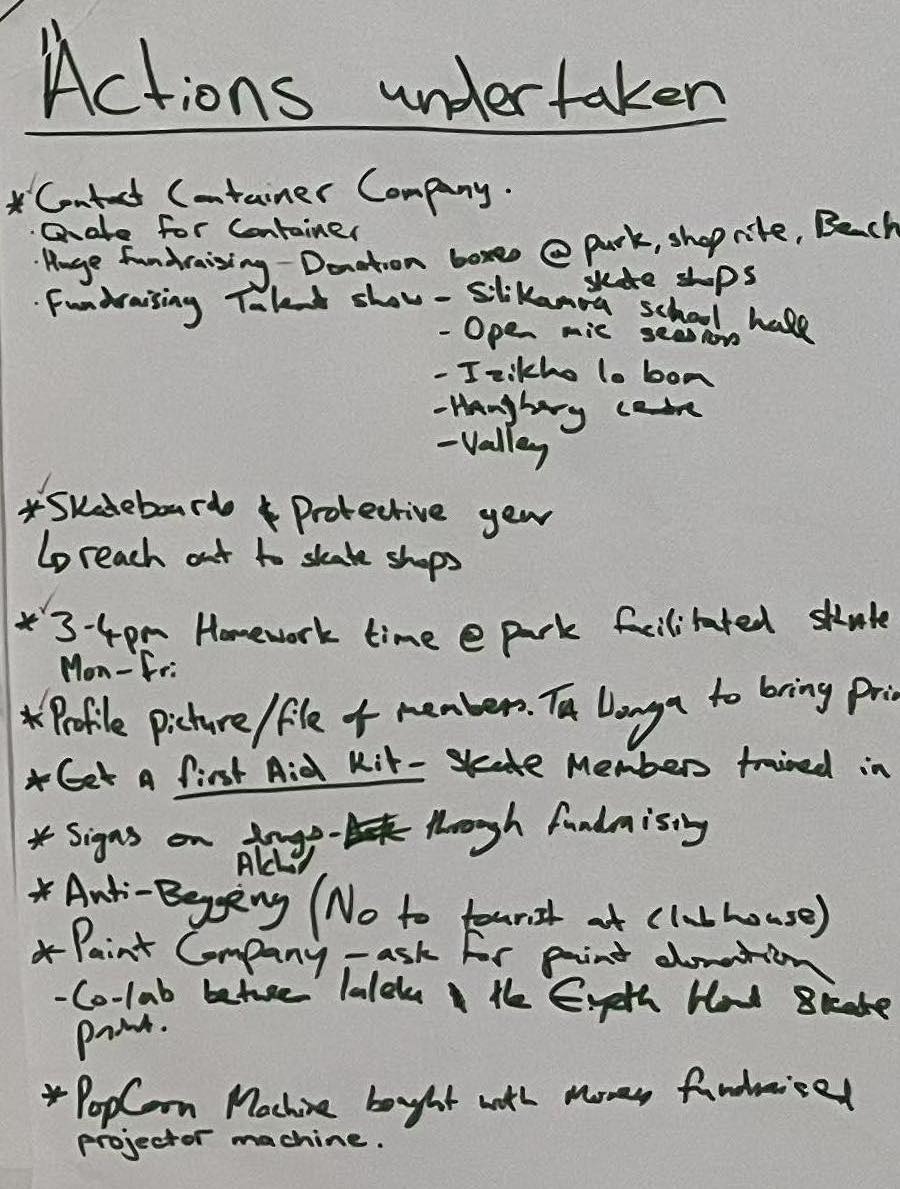